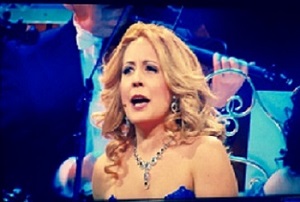 The soprano singer Iva Schell is on concert tour with the famous violinist and conductor André-Rieu and his Johann Strauss Orchestra, who brings a lot of pleasure to his large audience all over the world for more than twenty years.

I talked with Croatian – German lyric soprano singer Iva Schell on the 10th of February, between her tour performances in Rostock and Trier. This is my second interview with Iva Schell who wins with her openness and natural warmth.

Iva Schell: “I am on tour till the end of April. Besides Germany, I will perform also in Belgium, Turkey, Denmark and Sweden.”

Jasna Lovrinčević: “What are your impressions after spending nearly a month on this great tour?”
Iva Schell: “It’s very nice. Everything is fantastic, it is very joyful, fantastic audience, dear colleagues, a lot of people…”

Jasna Lovrinčević: “Who has selected your tour program?”
Iva Schell: “André-Rieu has suggested the aria. At first we had to see whether the aria “Liebe Du Himmel auf Erden” suits my voice and then we have made the decision together.”

The first performance on the tour was on the 14th of January and till the 10th of February Iva Schell already performed in nine German cities, in the halls which receive over sixteen thousand people or more, like the Lanxess Arena in Cologne which can accommodate 19,500 visitors.

Jasna Lovrinčevć: “Is it exhausting to perform every two days in a different city?”
Iva Schell: “It is not. I always receive new energy from the audience. The whole team is fantastic, we have a lot of pleasure and I feel more energy than tiredness.”

Performance And Energy From The Audience

Iva Schell, born in Ulm, has mostly performed in Germany and Austria, but also in Switzerland and America. In September 2015 she was on tour in Japan.

Jasna Lovrinčević: “Last year, from the 3th to the 11th of September 2015, you were in Japan with the ensemble Seefestspielen Mörbisch as Adele in Die Fledermaus by Johann Strauss the Younger. What was the reaction of the audience in Japan?”
Iva Schell: “The audience is different, the concerts are quieter, the audience is very grateful, calmer, but at the end the people are very delighted. The Japanese audience loves classical music and likes operetta.”

Jasna Lovrinčević: “On tour with André Rieu there is an energy exchange with the audience. Do you have a similar experience with other audiences?”
Iva Schell: “Whenever you perform in front of an audience if you perform well you obtain some kind of feedback energy.”

Jasna Lovrinčević: “What is your experience from Leipzig?”
Iva Schell: “As everywhere in Germany, the audience is very positive. The audience knows the artists, people come to the theater because of the singers, they often even come several times to the same performance, so the artists know the audience, they almost know each other personally.” 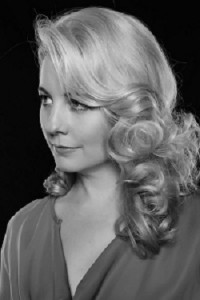 Iva Schell is engaged in the Opera Leipzig in Musikalischen Komödie and last year she was involved in “Wiener Blut” as Pepi, in “Der Graf von Monte Christo” as Valentine, in “Im weissen Rössl” as Klärchen, in “La cage aux folles” as Anne and in “Die Scardasfürstin” as Stasi.

In July and August 2015 she also appeared as Frederike in “Der fidele Bauer” in the City Theater Baden bei Wien as well as on the Richard-Wagner-Festival-Wels with a role in “Tannhäuser”.

On stage Iva Schell sings, acts and dances because operettas require that.
Iva Schell: “Operettas as well as musicals include dancing and singing, and that is fantastic. I love to dance. I prefer to dance while I am singing more than to stand and sing.”

Jasna Lovrinčević: “Do you need to practice ballet regularly?”
Iva Schell: “Yes, I train regularly. There is a choreographer for each operetta and you receive the help for the dance.”

Iva Schell has attended ballet school for six years. It is interesting that she was already behind the scene when she was five years old. At that time her sister was a ballerina and Iva accompanied her and since than she has been fascinated by the stage. At the age of twelve she decided to become an opera singer.

Iva Schell has studied singing at the High School of Music in Augsburg and the “Carl-Maria-von-Weber” in Dresden. It is interesting that she attended a masterclass by Sena, Srebrenka Jurinac (1921-2011), known as “the legendary soprano of the twentieth century”, born in Travnik, in Bosnia and Herzegovina, whose father was a Croat and mother a Viennese. After training at the Music Academy in Zagreb and starting a career at the Zagreb Opera, Sena Jurinac achieved international fame with her engagement at the Vienna State Opera signing the contract in 1944. In our first conversation a year ago, talking about the masterclass by Sena Jurinac, Iva Schell said that Sena Jurinac was very strict, but she also used to commend.

Iva Schell: “The masterclass with Sena Jurinac lasted for one week. It was a fantastic experience, I have learned a lot.”

Jasna Lovrinčević: “Did you know Sena Jurinac was Croat and did she know about you?”
Iva Schell: “Yes, we used to speak Croatian.”

Jasna Lovrinčević: “Did you know for her death and did you attend the funeral?”
Iva Schell: “I knew that, but unfortunately I could not go to the funeral.”

Iva Schell is very socially engaged and she is a patron of various associations. In two schools in Austria she is a frequent and welcomed guest where she takes part in different projects for school children.

Iva Schell: “By invitation, I run cultural programs in two different schools. This includes reading, singing, making music together or going out into nature or something else.”

Iva’s birth family name is Mihanovic, which is her father’s last name. Her father comes from Split. Iva Schell enjoys her visits to Croatia, which are always associated with her family, sea and beautiful experiences. She says that she is going to Croatia next summer.

Jasna Lovrinčević: “When was your last visit to Croatia?”
Iva Schell: “Last year in May. I was on the island of Brač and I also visited many other islands. I connect only positive things with Croatia: vacation, my family, sea, good food …”

The life in Alps 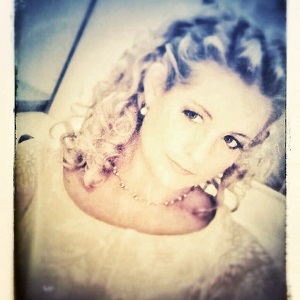 Another place, where many people would be happy to spend their holidays enjoying the peace and beautiful views, Iva Schell has chosen for her residence. Iva Schell lives in Alm, in Kärnten in Austria, where she used to live with her husband Maximillian Schell, famous actor and Oscar winner, who died in 2014. In Alm, they wrote together the biography of Maximillian Schell, published in 2012.

Iva Schell: “I live in Alm. When I have no duties I am there. It is a very nice place and I want to stay there.”

Jasna Lovrinčević: “Is it difficult for you to stay there due to the memories connected with your husband or is it maybe easier for you after two years?”
Iva Schell: “Yes, it is now easier for me. The passing time makes it easier in this regard.”

The two artists met in 2007 when Iva Mihanovic performed at a summer operetta festival Seefestspiele Mörbisch. She was involved in the operetta “Wiener Blut”, directed by Maximilian Schell. After that they often appeared together in concerts, but also in the operetta “Im weissen Rössl” in Munich.

Jasna Lovrinčević: “How do you feel now when you perform in “Im weissen Rössl” since you performed together with your husband Maximilian Schell?”
Iva Schell: “It is hard. The scene with the emperor is especially hard for me. However, the new performance has a different scenario, new colleagues and everything is different, and in this regard, I feel good.”