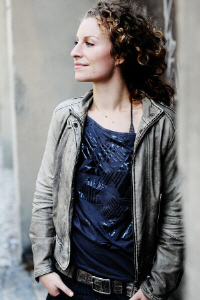 Alessija Lause, film and theatre actress, won the Best Actress award at The Stage Awards for Acting Excellence at the Edinburgh Festival Fringe 2011 for her performance in Danny and the Deep Blue Sea. In the same year at the Los Angeles New Wave International Film Festival she won The Best Stunts award together with other members of the stunt ensemble for her performance in a short film St. Christophorus: Roadkill.

She is a polyglot. She speaks six languages, and she can easily switch from one language to another if necessary. Her first language is Croatian as well as German since her father is German and her mother is Croatian, who comes from City of Pula. As a child Alessija often travelled to Croatia. In an interview that I conducted with Alessija Lause in October 2013, she lovingly referred to Istria. She said: “I go to Croatia every year, once per year, and I enjoy every second there.”

She also spoke about her desire to work in Croatia.
Alessija Lause: “I would like to work in Croatia. I think about making one solo play in Croatia or with Croatian artists. I worked in the 2003 as a production assistant at Ulysses Theatre on the Brijuni islands. That year in Croatia I worked for one German production company that produced German Film Awards. At that time I was very young and I wanted to learn all about theatre and production, and not just acting. I was interested in everything and all that experience was very good and useful for my current work today. ”

It always starts from the scratch

Besides her acting and stuntwork, Alessija worked as an assistant theatre director. She produced Danny And Deep Blue Sea and she is one of the founders and a member of the acting ensemble Santinis. She organizied the International Alexander Technique workshop in Berlin and, now, she has just started to work with her acting colleague on her own TV series, which they have produced together, and for which Alessija has written the scenario.

Alessija Lause: “I could not do just one thing. Everytime you work on something new, you have to start from the beginning, and this is what I really like in the acting work. It creates new opportunities and you never go in one direction. You have to react thoughtfully, reflect the situation and have self-confidence, but at the same time it is important to be flexible and open to new opportunities. That is what creates the excitement because you can not expect a preconceived course of events. It is necessary to go out of your own shadow and be transparent. This kind of openness creates new opportunities. ”

Alessija’s first appearance as an actor was when she was six years old. She told me how people from TV companies spontaneously sought permission from her parents on the streets in Munich for her to participate in some television commercials what her parents refused for a long time.

Today Alessija says:
Alessija Lause: ” To make an acting career you must have the discipline, will, desire and the love to do it.”

She pointed out how she has learnt the most from Larry Moss, a respectable acting coach, whose workshops she attended in Los Angeles and in Berlin.

Jasna Lovrinčević: ” What do you find fascinating about him?”
Alessija Lause: “I like the most that you feel very alive working with Moss. The acting profession is often very self-centric and egoistic. Working with him that egoism disappears because, according to Moss, the actor should be focused on the content of the story, and how to tell that story in the best way in order to touch the audience. It is important to tell a story with a lot of adore and love for the story and the people. ”

Larry Moss suggested to Alessija Lause the performance Danny And The Deep Blue Sea. With that performance she achieved fantastic success. She won the best actress award at the Edinburgh Festival Fringe 2011. With her performing and her acting she told the story in the best way, and in this way she achieved the most important goal for her. She touched the people in audience.

After the performance Danny And The Deep Blue Sea, many people from the audience were waiting outside the theatre for Alessija and her colleague, Nikolaus Szentmiklosia. The people were delighted with their performance.
Alessija Lause: “They were waiting for us. They were crying and embracing us. It was beautiful.” 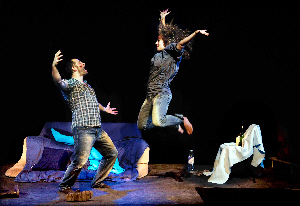 Alessija spent nice time working as a stuntwoman. She was prepared for this kind of work practicing different sports and participating in different dance troupes. As a stuntwomen she started to work in 2003 in the same period of time when she was working with Argentine theatre De La Guarda. At that time she was encouraged by one of her acting colleagues to apply to one company which was looking for stunts for one of their show.

Later, during the shooting of a series in Berlin she worked together with one stuntmen who was resposible for stunt work in that series. He was surprised when he realised that Alessija could work as a stuntwoman, and then he invited her to train in his stunt team.

That was the beginning, and later she received many invitations for different movies. She was the stuntwoman in Inglourious Basterds, Wer ist Hanna, The Three Musketeers, The International etc.

Alessija Lause: “It was very nice to learn all of that. For example a fight, that is like a dance, it is kind of a choreography. I like that very much. In stunt work you really have to focus on the things you have to do. You need to trust your partner, you have to know what he is going to do and what you have to do. It was fun for me to do that. I used to work with great people. I loved to work with them, we really had lot of fun. It was the teamwork with more men and less women. This work is quite different from acting. An actress takes her time, but stuntwomen has to act at the exact time; they count: three, two, one, and you must go, there are no chance to wait. It is a collaborative work. You must be very focused on what you need to do. ”

Allesija has been doubled for the actress Diane Kruger in the film Unknown Identity.

Since 2011 she hasn’t work any more as a stuntwoman.
Alessija Lause: “It is enough, I worked worked for many big movies, and now I need time for new things.”