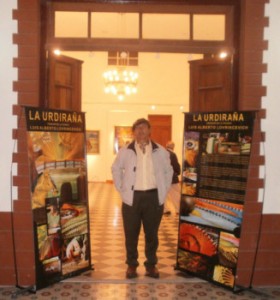 Luis Alberto Lovrincevich, the artist of great imagination and creativity, has been developing his art and his own technique since his early childhood. It has started as a child’s game that has awakened the imagination and curiosity to the Luis Lovrincevich, a game that has become more complex and more attractive, and that outgrew into an art of different forms and colors with a distinctive expressiveness.

Luis Alberto Lovrincevich is an Argentinian, a descendant of Croatian emigrants who moved to Argentina from the island of Hvar in the late nineteenth century. Lovrincevich was born and he lives in city of La Rioja.

He is known for the technique called urdiraña. In an interview that I conducted with him in June of 2014 he said that a word urdiraña he had taken from poetry of Argentine poet Marie Arguello, because the word urdiraña, (“warp” and “spider) is associated with his work process consisting of pulling the thread over the picked pins.

Luis Lovrincevich: “Urdiraña is a word created by a poet Maria Arguello from La Rioja, connected with the concept of “urdi ” what means to pull the thread and ” raña ” what means spider, to denote the type of art.” 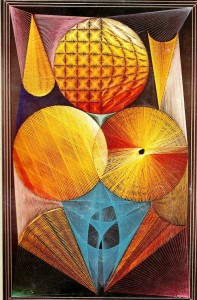 When Luis Lovrincevich was five years old he for the first time run the thread among the pins picked in a cardboard box, set on the triangle drawn on the box surface in a spontaneous game with cardboard box, metal pins and thread. He was excited about that and he was engrossed in this kind of play in his early childhood. His curious boyish spirit drove him to further research for new opportunities and these resulting creations encouraged him to create new ones.

The spontaneous child’s play developed into artistic creativity that repeatedly finds inspiration. Luis Alberto Lovrincevich first exhibition was in 1977 in the Center Hotel, in his hometown of La Rioja, the capital of the Rioja Province situated in northwestern Argentina. He has exhibited in various Argentinien Cities such as (Buenos Aires, Neuquen, Cordoba, Mendoza, San Juan) and in Mexico and Uruguay, too. 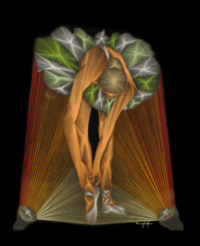 Luis Alberto Lovrincevich: “As a boy I created geometric figures, and in adolescence time, he created human figures with the same technique. In the adulthood I applied painting techniques as perspective, color game and movement through colors and lines. Through this study I was able to achieve, like the painters, the third dimension by manipulating the thickness and amount of woof. In this sense, I was able to express the fourth dimension (hyper space, Tesseract). In the last stage, I worked metaphysically and achieved the harmony of shapes, colors and perspectives. Through meditation I have transferred the peace into my work. ” 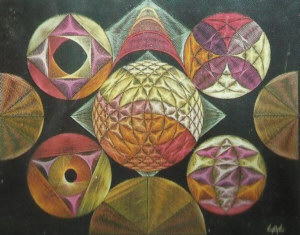 Jasna Lovrinčević: “What does it mean for you to work metaphysically?”
Luis Lovrincevich: “One’s spiritual crisis that I had in my life allowed me to return to my art on a new technical level, with another vision of life. That is reflected in the expression of my work.”

Jasna Lovrinčević: “How did you discover your talent?”
Luis Lovrincevich: “Playing around with a cardboard, a pin and thread. On the box I drew a triangle by the pencil, set the pins at certain intervals by the sides of a triangle and I made lines by the thread. That led me think about it and encouraged me to continue playing. ”

At the request to describe the process of work and this original authentic technique, Luis Lovrincevich explained:

Luis Lovrincevich: “Firstly, you protect wooden surface on which you are drown figures by the pencil. Metal pins are placed at intervals of five millimeter and protected by anti-corrosive agent. On the wooden surface background color is applied. At that point it begins the process of forming a figure by the thread. The perspective is expressed by a color and shape of the thread and that gives the identity of that art which I have created.”

Jasna Lovrinčević: “What kind of material do you use for your work?”

Luis Lovrincevich: “I use Chapadur (the name of the color and protection agent for wood), steel nails, sewing thread and paraffin oil for protection against damage.” 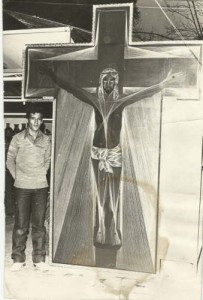 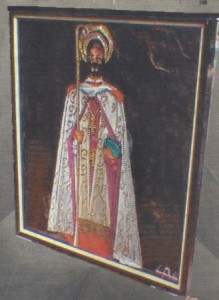 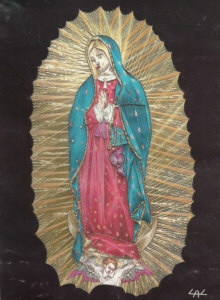 Going through the various stages of artistic creation Luis Alberto Lovrincevich has created a rich body of work. One of his works presents the image of St Nicholas. As there is a hill above the village of Sveta Nedjelja on the south part of island Hvar, called St Nichola, with the chapel on the top of it dedicated to St Nicholas too (among the village people known as St. Mikula), I asked him if he had chosen this motive related to his Croatian origin.

Luis Lovrincevich: “In the province of La Rioja Catholic faith is practiced, but this is also a part of the family tradition.”

Luis Alberto Lovrincevich was born in 1960 in La Rioja. Exhibitions with his new concept he held in March 2013th in Villa Sanagasta in La Rioja, Villa Maria in Cordoba 2012th.