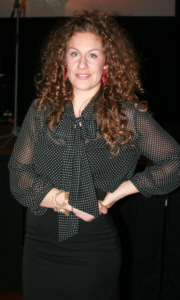 Allesija Lause, best actress at the Edinburgh Festival Fringe 2011 and best stunt 2011 in Los Angeles, was selected as one of two actors from the 700 applicants to work with famous Canadian Oscar winner Paul Haggis personaly on the scene at the seminar in Rome in March 2015.

In the interview I conducted with Alessija Lause just before the Seminar with famous Paul Haggis in Rome, the actress said:
Alessija Lause: “I’m very excited to be working with an outstanding artist, who in Hollywood makes very relevant, but still commercial and successful films, with an artist who produces, writes and directs. I am glad to be able to learn from him. For me that means a lot. ”

Alessija Lause, known as a theater and film artist with outstanding achievements, successful producer with experience in filmmaking says: ”At the momement I have a good idea for a film and a theater performance. However, it is too early to add anything else.”

Alessija Lause is co-founder and a member of the Ensemble Santinis. The Ensemble has won the audience in Berlin for the third consecutive year. The first Santinis performance, Rumors, in 2013, in which Alessija Lause starred and which was on her proposal selected, became the most successful production ever in Berlin Kurfürstendamm Theatre and the most successful production in Germany for the period of its presentation.

Alessija Lause: “I was the leader of last year’s production, but I didn’t play. It was a very good and successful performance. And now, the third is very successful, but I could not participate because at the same time I was working in Luxembourg. I was acting in English there, whicht I like very much. I was working with a young director Anne Simon. It is important for me to make new contacts and meet new people.”

Uhe Role In The Television Series ”The Team” 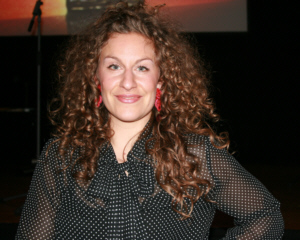 Currently Alessija Lause is brilliant as an actress in the television series ”The Team’‘. It has been on German broadcaster ZDF since February 2015. Her first appearance is in the third episode.

Alessija Lause: “It was filmed for ZDF last year. It was a very ambitious and very good production. I enjoyed participating in ”The Team” enormously. It was a German, Belgian, Swiss, Austrian, Danish and Swedish co-production. The series features eight episodes. It’s very interesting, the actors are great. The development of the story is horizontal, that’s means the story unfolds through all the episodes. It’s a very interesting story, actually terrible and the way the story developst is very intense.”

Alessija Lause has starred in several television series such as Polizeiruf 110, Tatort, Küstenwache whose theme is similar to the most recent series, so I asked her if she loved that role, or it was a coincidence that she starred in that kind of films.

Jasna Lovrinčević: “Do you like that role? Are you looking for a role like that or the roles find you?”
Alessija Lause: “I’m attracted to portray a human being who is real, with his or her ups and downs, with its bright and dark sides, someone who is different, so you can see the different sides of the coin, not someone uniform…I take the roles that I like and sometimes the roles find me . These characters are very interesting. I like them because they are strange people, sometimes very good, sometimes not good at all. I like them because they have a very tight life.”

The Most Important Thing To Me Is To Tell The Story

Jasna Lovrinčević: “Until now you have worked as a theater and film actress, producer, director. Do you work all alternately or simultaneously?”
Alessija Lause: “I work as it comes. The most important thing for me is to tell stories. I will do whatever I have to do to be able to do it. So I’ll either see wether I can find someone who would produce it or whether I will work it myself. I love people and I love the story. That is why I am going to find someone, or I will see if someone finds me with who I can experience this passion. It is very important to work with an equal share. I will always do so that I can fulfilled it, to be in front or behind the camera. I like when people can revive what it previosly used to be only in words, written on paper. I like to transfer the feelings; to see what it is happening and to bring it to life. That means a lot. I’m happy if I can revive a character so that people feel touched, so they become curious, angry, laugh till they drop, or start thinking about what they have seen or have experienced.” 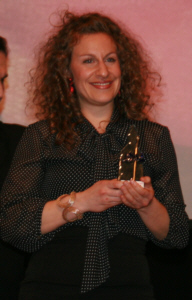 Jasna Lovrinčević: “What would you like to transfer to the people?”
Alessija Lause: “I do not want to exaggerate if I say that this is actually the task of art: I want to stay on theme important to our life, to society. Maybe with our art we can slightly improve our society, as thesse subjects warn people and point out a problem or provokes a smile. These are all possibilities. I just think I should take advantage of this platform. I hope to continue getting opportunities and that kind of platforms, so I can tell relevant stories. It’s very exciting, whether it provokes rejection or desire to grasp it personaly. I think that’s important.”

Allessija Lause is this year’s winner of Večernjakova Domovnica, the prestigious award of the Croatian daily newspaper “Večernji List”. This prize is awarded in the categories of drama, music, spectacle and sport for the Croatians living abroad. On the occasion of this award, on 8th of March 2015, Alessi Lause stressed that she will be glad to work in Croatia, her motherland, the country of her origin.
Allessija Lause: “I would like to work there!”