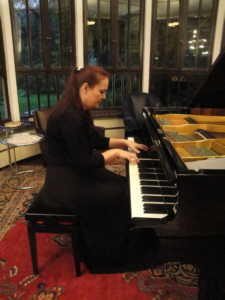 Villa Henn in Cologne is synonym for an immediate meeting of artists and audiences.

In the great hall of the villa, the owners, husband and wife, the pianist Ana-Marija Markovina and university professor Helmut Reuter, have revived the salon culture of the nineteenth century with music projects and scientific lectures.

Villa Henn, birthplace of professor Helmut Reuter, built by his great-grandfather, is under monumental protection. To the visitors and music fans it is a fantastic experience of the former salon life, were music and inspiring socializing is offered.

The hall is comfortable and spacious with a foyer and a balcony overlooking the park. In the hall, objects of artistic value and valuable objects of use arranged on the beautiful antique furniture attract the attention of visitors. The concert stage with a piano is located in a glazed, semi-circular area. A view to the park through the window behind the stage completes the music experience. After the concert there are continuing discussions about music, arts and other topics.

This was the atmosphere during the concert of Ana-Marija Markovina on the 16th of September 2015 with a music program which it was a prelude to her great tour to Central and North America, accounted for late September. Concerts and masterclasses would be held by Ana-Marija Markovina in Canada, Jamaica, Mexico, Guatemala, San Salvador and Costa Rica. 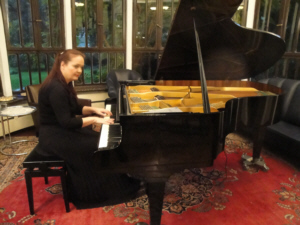 “This concert is a dress rehearsal for the tour.” said Ana-Marija Markovina in the conversation I had with her after the concert.

She had chosen technically and musically a demanding and a difficult program. All the music pieces belong to the German musical tradition. On the tour she would be performing works by Carl Philipp Emanuel Bach, Robert and Clara Schumann, Franz Liszt, Louis Adolphe Le Beau and L.V, Beethoven and concerts by W. A. Mozart.

Ana-Marija Markovina began the concert with the Sonata in C- minor, Wq 65/31 by Carl Philipp Emanuel Bach. As she performed the Rondo, G – Major, Wq 57/3 by C.P.E. Bach, there were dancing raindrops outside, clearly visible through the windows, adapting to the syncope of that attractive musical work, full of diversity, rhythmic and dynamic, with beautiful melodious themes which interrelated as questions and answers. In a similar way, after the rain, the sun provided us with an interchangeable sight, twinkling through the leaves, corresponding with melodic passages of that Bach peace.

With Papillons (op.2) by Robert Schumann and Franz Liszt (Apres une Lecture de Dante. Fantasia quasi Sonata), theme and variations in F minor op. 3, by Louis Adolphe Le Beau and Clara Schumann (4 Pieces characteristiques Op. 5), Ana-Marija Markovina took the audience on a musical journey through romanticism. She played with the virtuosity of a genius and with incomparable energy, interpreting the works originally, with a lot of artistic freedom and personality. Her high sense of musicality linked each work into a compact unit with clear and differentiated motifs and themes as well as with colorful but temperamental dynamic expression.