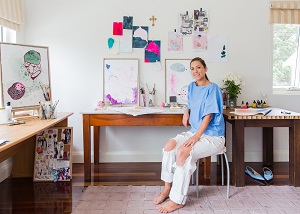 opened on 3rd December 2015 in Huges Gallery in Sydney, in Australia, whose opening attracted many visitors. Gabrijela Iva Polic presented sixteen works created in the last eight months, reflecting her research into the nature of human relationships. Exploring different connections in nature and among man-made objects, she shows the magical world of colourful ” Land of Wonderfuls “.

Shortly after the opening of Polic’s exhibition in the interview I conducted with her, she said:
Gabrijela Iva Polic: “Most of my paintings are of natural scenes which depict what I like to think of as ‘characters’ that are having some sort of dialogue which each other. One thing always grows from another which is leaning on something else that drips down and waters another thing giving it life and letting it grow. I don’t like to draw or paint things are how they are. I invent my own species of things. I suppose that is how the work can seem somewhat fantastical. The paintings are all about the connections within them. Everything needs to be connected in some way and play a part in the whole, both in the sense of the image and the conceptual idea. Conceptually its all the parts and all the people that make up who you are. Because in a sense I think I am made up of many of those who have played some part in my life. My work explores that.” 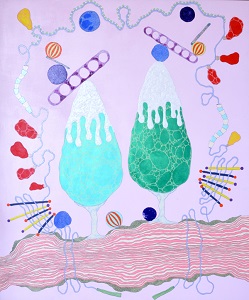 Gabrijela Iva Polic, after graduating from the University of New South Wales’ College of Fine Arts in 2013, she exhibited her paintings in Sydney in 2014, presenting scenes in nature as a metaphor for loving relationships in human that help them grow. For this year’s solo exhibition she prepared pictures which gravitate towards the man made world with elements like machinery.

Jasna Lovrinčević: “Have you anything essential change in your artistic concept
since last year’s exhibition?”
Gabrijela Iva Polic: “The work has definitely developed since I exhibited back in 2014. For the last couple of years it has been relatively simple in composition. Now, the compositions have become more complex, and I’ve added more elements to the pictures than ever before. Another interesting point is that previously my work only comprised a sort o ‘landscape’ theme. Now it also reflects on the built environment by referencing working machines along with man made objects such as jewellery pieces, necklaces & earrings to be specific. This also shows the move away from pictures containing only natural scenes. I’ve slowly starting gravitating to the man made world with elements like machinery.” 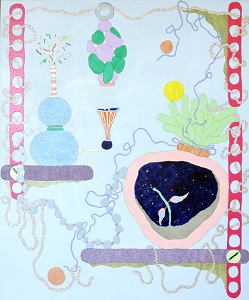 Gabrijela Iva Polic: The machine that ran on wonderfuls

My concern is only with the good

Gabrijela Iva Polic: “The work is a reflection of the immaterial nature of the human bond. My earlier work showed this by exploring the workings of symbiotic relationships in nature. And so now it was important to start referencing man made objects in the work, machines because they are constructed specifically to make things work. A machine can be like the network of beautiful human relationships. Some people may say yes, but machines can break just like a bond. But that is not my concern, my concern is only with the good.” 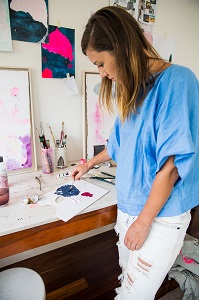 Jasna Lovrinčević: ” What was your leading idea prepearing your exhibition?”
Gabrijela Iva Polic:”The leading idea was to continue with the same concept I have been concerned with for the past few years – the nature of the human bond. However, along with that, the work is much more playful and fun. In both the compositional structures and colours used. My aim was to bring an element of joy into the work.”

Speakng about nature of human relationships Gabrijela Iva Polic emphasized: ” I can’t speak for anyone but me. I’m just exploring my own world, mainly the bond I myself have with loved ones. Those I hold dear are my muses.”