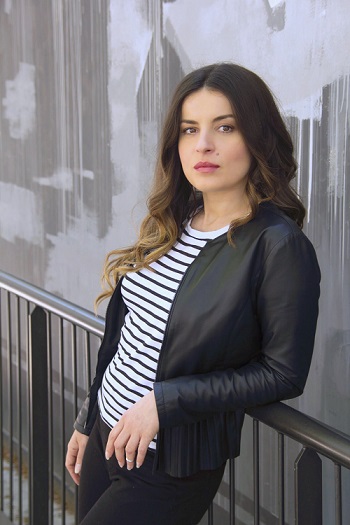 Both film and theater are one big school of life where you never stop to learn and get inspiration” says the artist Kristina Orlovicin a interview we had in November 2020 following her filming for the short film Sueños rotos, where she is one of the leading actress.The film is produced by Nanu Film .

Conversation with Kristina Orlovic is pleasant and interesting. Since the beginning of her Studies of Scenic Design at the Academy of Fine Arts in Florence, driven by a love of performing arts, she has been constantly exploring new artistic expressions, especially contemporary and butoh dance. Kristina Orlović easily introduces you to challenges facing physical theatre, which she has specialized at the International School of Dramatic Corporeal Mime – MOVEO in Barcelona, as well as to the complexity of the butoh dance, which she has studied by different artists like Sayoko Onishi and Imre Thormann in Italy and later in Spain by Sua Urana, Yumica Yoshioka and Rosanna Barra. With her great enthusiasm for the theater and dance she has faunded her own theater. She likes to talk about it because it is her own creation. It is a visual theater where she has used unusual theatrical techniques based on her academic knowledge and her dance experience.

Kristina Orlovic is currently focused on film. She belongs to small group of actors who have academic knowledge, stage experience and physical control acquired through dance. She made her film debut in 2011 acting in the short film Alkiler. In the year 2018 she was a guest actress in the Spanish series Cançó per tu, La Fossa, and Mira la que has hecho and in 2019 in the serie El inocente.

Jasna Lovrincevic: “Until two or three years ago, since you have started working on film, theater and dance had been dominant in your artistic career: from your Studies of Scenic Design and physical theater through your training in contemporary dance and Japanese butoh dance to founding your own visual company. Today, when the film is one of the most powerful and for many young people one of the most attractive industries, what is so amaizing about theater for you? What challenges present the theater for young artists today? ”

Kristina Orlovic: “Unlike film, theater takes place in real time, in front of the viewer’s eyes, what enables emotional and human connection (between actors and audience). That is lost in other formats. Theater requires a lot of preparation, presence, creativity, memory and precise coordination of all stage elements. responsibility and adrenaline because the whole performance of the play depends on it. I am most impressed by this direct communication in front of the audience, adrenaline and presence at the time of performance and the process of creating the play. I think every young actor should initially make experience in the theater because the theater is much more complex and there is mach more demanding approach to acting, and the actor receives immediately feedback from the audience.”

Kristina Orlovic: “International School of Physical Theater MOVEO runs a full-day professional development program in physical theater, based on a dramatic body mime developed by French actor Etienne Decroux. It is specific training focused on dramatic body mimicry. Through this artistic training the students obtain knowledge, methods and technical foundations that allow them to use their body as a central element of creation and interpretation so that they can become creators of their own projects.
The training is focused on the idea of turning the actor’s movement into something tangible for the viewer, using his (actor’s) body as the main tool like “the thinking body”.
The aim is to make the invisible to be visible: feelings, thoughts, situations, dreams, objects, etc. ”
The study program is structured around four main blocks: technique, improvisation, composition and repertoire. Graduate program lasts for two years and specialization program for three years.”

Jasna Lovrincevic: “Together with the Swiss artist Nathalie Pierrehumbert, you have founded your visual and physical theater company Ooops! Company in Barcelona, where you have realized two plays: Libre (Free) and Orphfic (Orpheus). What did drive you and what vision of future work did you have at the time of foundation of your Company? Did you already have ideas for the plays you have created?”

Kristina Orlovic: “Originally we were driven by a passion for physical theater and a love of creation. We wonted to retain the pleasure of doing what we love and to explore originality in artistic expression through a variety of stage methods and skills. The play Libre started as our final project in specialization program at the International School of Physical Theater in Barcelona where I and Nathalie Pierrehumbert met. Following our graduation we decided to continue with that play and to start a company.”

Jasna Lovrincevic: “Following the success with the Libre, you have received the status of an artist ” in residence “. What has this prestigious international program enabled you to do?”

Kristina Orlovic: “It provided us with financial support for the project, the use of the L’Epicentre Theater for the performance and premiere of our play in Geneva in Switzerland, and collaboration with several other artists from the world of music and digital art who took part at the final form of the play. Let’s call it a great creative pleasure.”

Jasna Lovrincevic: “Libre (Free) has fantastic scenes, the flight dance is particularly impressive, the set design, music and lighting, the whole performance is amaizing. If you could say a more about the theme itself? Where did you perform that play?”

Kristina Orlovic: “Libre is a metaphorical theatrical creation that reveals a divided, sensitive and irritated character, a victim of one’s own thoughts, desires and nightmares. It explores the boundaries between body and soul, reality and imagination within a world that calls itself ‘free.’ It combines different stage methods where body movement, music, sound, lighting and video mapping merge into space and influence each other, externalizing the inner world of the main character as well. We have performed it in Barcelona and Geneva on several occasions in various theaters and halls.”

Jasna Lovrincevic:”The Orpheus had been prepared, but unfortunately it haven’t been performed in front of the audience. Have you prepared Orpheus in Barcelona or Switzerland? You said that the play contained fewer dance scenes. What approach did you have to that play?”

Kristina Orlovic: “Yes, unfortunately we were not able to perform the play publicly due to financial problems that arose during the creation of the play. We prepared Orpheus in Barcelona where we also got an art residence, in fact a rehearsal space, but this time without financial support. The main event of a play is a rival relationship between love and art, and an addiction to it. The approach was based on physical theater stage techniques such as body mimicry, E. Decroux techniques, live music and improvisation. We were inspired by poetry, fine arts and music.”

Jasna Lovrincevic: “You and your co-founders of the company, are the overall authors and interpreters of both plays. It is probably an immense experience in both artistic and business terms. Do you think that a film, in which you have just started your career, could provide a similar artistic and aesthetic fulfillment compared to the one you have achieved with theater?”

Kristina Orlovic: “I sincerely hope it could, although the approach and dynamics are different in film. Both film and theater is one big school of life where you never stop to learn and get inspiration”

Jasna Lovrincevic:”You are the author of the theater play La Soledad and the co-author of the production El visitante de la oscuridad, created in 2013 in Spain. You performed it also in Zagreb and Italy. In addition to physical theater, butoh dance is the main means of expression in both plays. Did you have an idea about the butoh dance before starting your courses with that dance? How would you characterize butoh dance in terms of your experience?”

Kristina Orlovic:”I started with butoh dance while I was living in Italy where I saw a performance by Japanese butoh artist Sayoko Onishi and it aroused my great curiosity because it surpassed anything I had seen before. Then I decided to explore this form of contemporary Japanese dance because it seemed very interesting, daring and original. There are no set style, it can even be purely conceptual without any movement. It is defined by aesthetic features that oppose Western archetypes of beauty, unusual minimal or almost non-existent costumes, white body color, grotesque movements and strong expressiveness. I would characterize it as a meditative state of the soul in motion, in search for individual and collective memory desireing to explore primordial human conditions.

Butoh inspired me to do a solo performance of La Soledad in Barcelona, where I met Catalan artist Lydia Zapatero who was also exploring this form of
dance. Lydia and I decided to independently produce the play El visitante de la oscuridad in collaboration with the Vueltabajo Theater, with which we were creating and collaborating in Barcelona at the time. The play was inspired by Edgar Allan Poe’s song “The Raven” and the butoh dance technique. We presented both plays in Zagreb at the FAKI Festival of Alternative Theater.”

Kristina Orlovic: “I started with the contemporary dance quite “late”, at the age of twenty, when I moved to Florence to study. I performed it mainly in Florence and Tuscany and later in Spain where I continued with my studies.”

Jasna Lovrinčević: “During the arrangement for this interview, you mentioned that you have traveled a lot. As a student you visited India and you were in the Himalayas. How inspiring these trips were for your artistic life, although your growth in Croatia as well as your stay in Florence were equally attractive and inspiring?”

Kristina Orlovic: “I find that every experience, country and culture I have lived in, has influenced and inspired my way and have added something authentic to my personal and artistic growth. I love to travel, meet different cultures and customs, learn languages and seek inspiration in various forms of artistic expression.”