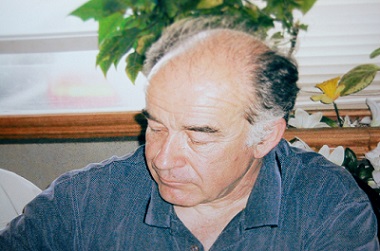 Davor Grunwald, the first educated industrial designer in Croatia and former Yugoslavia and ULUPUH’s Life Achievements Award winner, with his retirement in 2008, did not cease with his creative activity. The enthusiasm with industrial design, inspired by the beauty and simplicity of the Italian industrial design, which he saw for the first time 1964 at the exhibition in Zagreb, has never diminished.

With great enthusiasm he approached all demanding industrial design challenges working for the leading industries in Zagreb after completing his graduation and receiving master’s degree 1968 in Vienna at the Academy for Applied Arts, at the Department of Industrial Design.

With the same enthusiasm he continued to design various products in Canada where he settled in 1975, and where he in 1982 received the prestigious Canada Design Award for one geophysical instrument. He has left Zagreb due impossibility to work as a freelancer.

With the same enthusiasm, since his retirement he has designed a Porsche Boxster rack, collapsible 200 liters wine/oil barrel, minimalistic chair Elips and he has adapted his student work Sculptra for the application in architecture.

Today with the same enthusiasm and passion he approaches every new idea. He is open to challenges, always guided with high standards of design principles, ergonomics and aesthetics.

At the moment, Davor Grunwald is preparing materials for Grant Retrospective Exhibition at the Technical Museum Nikola Tesla in Zagreb, announced for May 2019. He told me, with enthusiasm, that he would like at that exhibition to present the whole developing process of Elips Chair, which started in 2015, and was completed 2018.

He has studied historical development of designed chairs and his concept for Elips Chair he considers as an appropriate challenge of time, especially regarding its production simplicity, its supreme ergonomics and aesthetics.

He is comparing his Elips Chair with revolutionary creations of chairs, designed by Michael Thonet in 1859, Marcel Breuer in 1926 and Verner Panton in 1960.

“You started 2015 with your Elips Chair concept. How did you come up with idea to design your chair? Who inspired you and what was crucial by that decision?”

For the last five years, before my retirement, I helped one architect to produce his technical documentation for his chairs. It has been some kind of his hobby to design the new chairs and he has created about twenty of them. He has obtained few patents, how to make, how to assemble… I did not try to mix to his concept approaches. He gave me the indication that he was the “boss”.

I retired at the age of 68. Suddenly I had plenty of free time. At one moment I asked myself if I could design my own chair? The answer was: Yes I can and I will! That’s how it started.”

“How did you decide in which direction you would go, what type of chair would you like to design?”

Davor Grunwald: “In Canada I was often a consultant to different inventors with good ideas for a new product. They had to hire an industrial designer in order to get a grant from the state, for development. I was paid out of that money. It is known statistically that from ten such ideas only one goes through to the market.The other nine fail because of expensive tooling. In my cases no one products, I was engaged in, came through for the same reason.

I have developed several ideas in my own arrangement, without industry backing: Sculptra, spherical module for the application in architecture, 200 liters collapsible barrel produced with roto-molding technology and a machine for the production of oxygen. All these stopped when it came down to tooling investment.

Learning from that experience, I have developed my Porsche Boxster rack without tooling. I was using classic CNC (Computer Numerical Control) technology. Even today I am ordering the parts and assembling the rack when I get an order.

So I concluded that my chair would not be produced by expensive tooling. It should be produced by classical CNC technology, without any screws, without using welding, without additional hardware and without tooling. My speciality has been always ergonomics and aesthetic elements and this should be “automatically” applied.
That conclusions and decisions did point out toward the types of chairs for use in restaurants and private homes in exterior and interior. I started designing with small models a ratio of 1 to 10.” 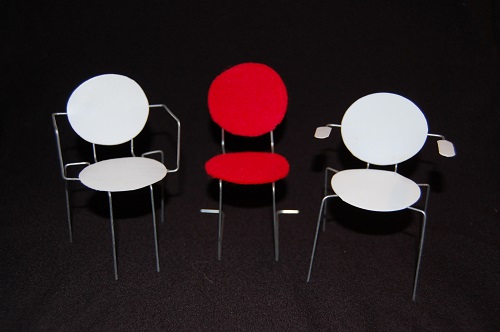 “How different are your first conceptual ideas of the chair compared to the final design?”

Davor Grunwald: “On the picture of the small models, the white ones on the right side, looks exactly the same as the final design. I determined already in this starting phase that the ellipse shape fulfills the basic requirements for seat and back support. In the first two prototypes I had used stainless steel tube for legs and for the third prototype I replaced this with the full rod. Now the chair has the stability. I spent a lot of time to design the part of the leg which enters into the wood. This detail in the first prototype was not good and the legs of the chair turned and collapsed under my weight and I fell on the floor. I experimented and found the solution which works and this is my secret for which I can get a patent. By the first two prototypes the legs were sticking out from the seat because of the tube bending technology did not allow the bending portion to be close to the seat. By the third prototype I found the method to solve that and now this detail is correct physically and visually. By the small model, it could be observed, that the ellipses are oriented horizontally. In the third prototype they are vertical. With this change, the depth of the seat and the height of the back support has been gained. The proverb “The secret of success is in details”, fits nicely here.

Davor Grunwald: “I have studied this question and I can state the following. On the market today there are a tremendous number of chairs. The assessment criteria, just to respond to your question, it would be the first application of new material or new production technology. I studied the modern era and started with 1859 when Michael Thonet created his chair with bent wood using the steam. This chair is being produced in million of numbers. Architect and professor at Bauhaus school, Marcel Breuer, first applied bended metal tubes in chair design. The chairs are still being produced today. Danish designer Verner Pantone created in 1960 his plastic chair in one piece and its production is still strong nowadays.
These three chairs I would call “revolutionary”. All other chairs on the market are, more or less, the alternatives of these three. The wooden chairs follow the tradition of many centuries back.”

“How the Elips chair concept relates to this evaluation?”

Davor Grunwald: “Here is presented a chair concept which has all functions which one chair has to have: comfortable to sit on – ergonomics, aesthetically good looking and it could be easily produced with minimum materials without tooling investment. This approach could be called – minimalistic. The production is based on CNC technology by production of wooden parts and stainless steel parts by turning, milling and bending of the rod. The seat and back support have the same elliptical shape, they are made of 18 mm thick laminated wood and they are painted. Prototype is in red because I like this color. However, the chair can be painted in all strong colors (yellow, green … and the color of the natural wood). The legs are made from 12.5 dia stainless steel rods. There are two versions: with arm support and without. It is being assembled by two components Epoxy glue. Design is protected!

Elips chair is now ready to conquest the world! 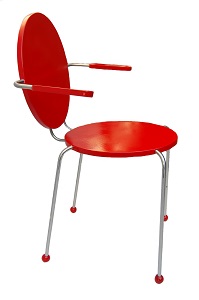 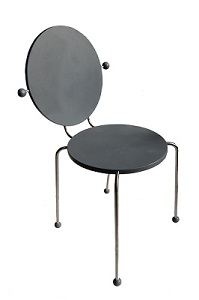 The concept of this chair is nicely presenting me as a professional designer. Lots of time I invested in studying the influential elements. From there I just followed my intuitive feelings about constructive and aesthetical solutions. This method served me well during my half century of practice. Elips chair will be remembered by extremely simplicity and characteristic look.”

“What are your intentions now?”

Davor Grunwald: “All Elips Chair development materials, small models, prototypes will be shown at Grant Retrospective Exhibit in Technical Museum Nikola Tesla in Zagreb, in May 2019.
After that I will organize exclusive small series production and chairs will be assembled by order only, like my Porsche Boxster rack. Each chair will have its number and my signature.
If someone would come along and would like produce this chair in larger quantities, robots could produce this chair in ten minutes.
Red Dot is a very successful world organization for design awards. They have been in business since 1954. I intend to send my Elips chair for their evaluation. I hope that they will share my enthusiasm.”

“Your whole life is successful. Your designs are highly regarded in Canada and Croatia and they have obtained prestigious awards and you have received ULUPUH’s Life Achievements Award. Your Elips Chair shows inventiveness and openness for new challenges. Could you tell us more about yourself, in the sense what inspires and drives you, and what gives you that energy to persist to the end, until you achieve your goal?” 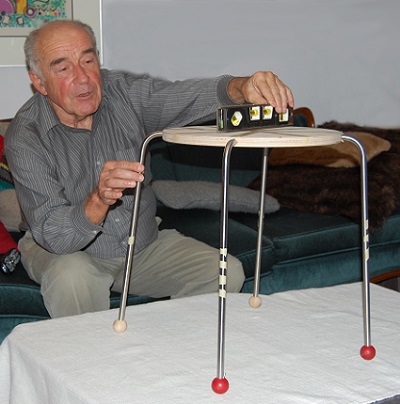 Davor Grunwald: “My intuition served me always well. You have to have predisposition; believe in yourself and persistency. I surround myself with creative, stimulative, well minded people. If I like to achieve something I am trying to find a few ways to achieve that. On this journey I usually run into disappointments, dissatisfactions but remain firm and stubborn. Positive guidelines and by some probability, push me out on the surface and then I see the daylight. This is the feeling I am searching for, feeling of achievement. In the last few years tremendous things have happened to me; Life Achievement Award, Exhibitions, Monograph, and all these accompanied with interviews and great articles – all these stimulates me, in my retiring, to engage in the creative process without stopping. By this statement I have to mention colleagues who are helping me directly or indirectly. All by yourself you cannot achieve anything.”