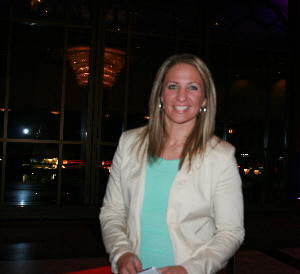 Nikki Adler, German with Croatian origin, beautiful and attractive, the first at the world boxing rankings, the four times – champion of the world, was the guest of honor at the closing gala dinner of the Croatian daily newspaper Vecernji list, in Bad Homburg at 8 March 2014 .

She achieved the fourth world title in Chechen in December 2013 where she competed as the first woman in the boxing ring and thus entered the history of Chechen boxing.

Boxing Brings A Lot Of Joy

In the interview, which I conducted with Nikki Adler in Bad Homburg, the four-time world champion announced a new contest in May and September of 2014.

Boxing assimilited her all the time and it brings a lot of joy to her. She wants to achieve new victories and she hopes to continue to be involved in sport for her lifetime.

Chris Evert, the tennis player of all time, said after quitting playing tennis that she could not believe that she woke up without thoughts about tennis anymore. Similarly, Nikki Adler, who is the first at the world boxing rankings, says that the boxing is always her first thought in the morning when she wakes up. However, Nikki Adler still finds time to relax and for her friends.