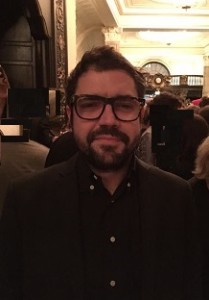 The new play Alles muss glänzen – The Homemaker, produced by Ivana Vrgoč and his production company santinis-Production, premiered on 25 February in the Theater am Kurfürstendamm in Berlin. The uniqueness of this premiere was the presence of the author of the play in the audience. The writer Noah Haidle specially came from America to be at the rehearsals, and he watched the first public performance. On the end of the performance it was spectacular moment when the producer Ivan Vrgoč invited Noah Haidle to join the actors on the stage while the audiences was greeting them with long applause.

Otherwise,the audience which completely filled the 800 seat theater, with spontaneous applause constantly was expressing its delight during the performance. 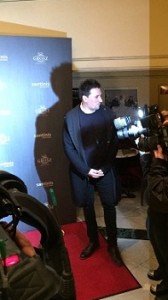 Rebecca, played by famous German actress Maria Furtwängler, a central figure Haidle’s play is a housewive. She is a person of great hope, in constant expectation of her husband, full of understanding for everyone. She cooked and danced. Nothing could confused her in this sense, although around her all falled down, and the apocalyptic flood reached her window. “We can not different. We behave like everyone else. Live, as you do not have to die.” It was Rebecca’s answere to her daughter Rachel (Sarah Alles) when she asked her why they were so busy preparing their food, while outside the world was going to collapse. As Noah Haidle stated in my interview with him after the show, his inspiration for “The Homemaker” was his mother. At the end of the play he paid tribute to Rebecca’s choice of her lifestyle. Her husband, who long ago had gone in search to his happiness, returned and admited that he did not find a happiness on Kilimanjaro nor anywhere in the world, but he founded it in Rebecca’s home and at her set table. This emotionally charged moment, director Ilan Ronen placed deep under the water of the apocalyptic flood. The different scenes lined on the stage, surreal and tragicomic provoked gales of laughter, but also addressed issues of life and it’s meaning and metaphorically its opened the questions about a life in the actual world. 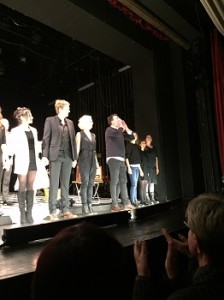 Just after the premiere, on my question about Santini’s preparations for the performance, producer Ivan Vrgoč said:
Ivan Vrgoč: “It was hard, but it was good. We are happy that the writer came from America and that we could applied his advice and suggestions.”

Jasna Lovrinčević: “People were laughing, but it is really serious?”
Noah Haidle: “Yes, hopefully the comedy brings people in, makes them think, and this is going to be fun and then you are going to punch them in the gut, hopefully.

Jasna Lovrinčević: “Mr. Ivan Vrgoč told that you would write a play specifically for his company Santinis?”
Noah Haidle: “Yes, that is the plan”

Jasna Lovrinčević: “Who was the inspiration for Rebecca, for the play?”
Noah Haidle: It is my mum. She is the homemaker. Thats how we in America call a housewife. The women stayed home and didn’t have a career. So, what my mum did.” 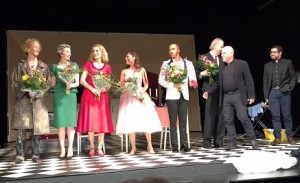 Noah Haidle has published several books, the most famous is Mr. Marmalade, in Germany published together with Lucky Happiness Golden Express and Ada And Her Daughter. The Homemaker or Alles muss glänzen, German magazine Theater heute named the best foreign theatrical play for the year 2015 in Germany.