Croatian Design Association organized the retrospective exhibition for Davor Grunwald, industrial designer with long carrier in Croatia and Canada. The exhibition under the title DAVOR GRUNWALD: RETRORAMA of INDUSTRIAL DESIGN, 1968 – 2008, held from September 13 to October 12, 2017 in Zagreb, at HDD Galery (HDD- Hrvatsko dizajnersko društvo – Croatian Design Association ), was the most comprehensive showing of Davor Grünwald design, created in Croatia and Canada.

The Canadian Ambassador to Croatia mr. Danijel Maksymiuk opened the exhibition and in his opening speech he expressed the gratitude to Davor Grunwald for bringing his talent, and new techniques he had learned in Austria and perfected in Zagreb, and shearing them with Canada, his new country.

On September 21, it was organized guiding tour through exhibition by Davor Grunwald who was talking about his project and experiences from Croatia and Canada.

The exhibition was exceptionally well attended, it draw attention of media, TV News and TV Cultural News. Overall it was evaluated as one of the best exhibition in HDD history.

Also, the documentary film has been made in which Davor Grunwald describes each of his design product in details. Marko Golub is the author of the film and Miran Krcadinac is cameramen.

The authors of the exhibition, Marko Golub and Koraljka Vlajo are also the authors of monograph, published under the titel: Davor Grünwald – Industrial Design and presented at HDD Galery on October 11, 2017.

“I am full of nice impressions, anecdotes, before, during and after opening”, said Davor Grünwald in interview we had on October 12, 2017.

The retrospective exhibition in Zagreb and publishing of his monograph are the great acknowledgments for Davor Grunwald who after his graduation from Academy for Applied Arts in Vienna 1968, was active in Croatia until 1975 designing electronic desk calculators for Calculating Machines Factory, machine tools for Prvomajska and chairs for Metal Furniture Factory – Jadran. For his work he received City of Zagreb Award, 1973 and in the same year Golden Medal in Leipzig. Since 1975 he has lived in Canada where he has designed high speed computer printers, diverse geophysical instruments and tractors. In Canada, he received prestigious Canada Design Award, 1982 for design of one geophysical device. Since his retirement in 2008, Davor Grünwald has worked as hobby designer.

Jasna Lovrincevic: “How did it came to realization of the exhibition? What were the first steps and how did the process of setting up the exhibition develop?”
Davor Grunwald: “I have been in touch with Boris Ljubicic, Croatian famous graphic designer, since the end of sixties last centuries. He has known me well and he has followed the news about my profesional life, so three years ago he proposed to Museum of Art and Craft ( MUO) in Zagreb to archive my professional opus, created in the last fifty years. Soon after that, Ms. Koraljka Vlajo, curator at MUO, informed me about this happy news. I immediately started with collecting the materials and to write my memoirs. That work has required a lot of time and discipline. Last year, in April 2016 I brought these materials from Toronto to Zagreb and I gave it to Mr. Gasparovic, the head of MUO. By this occasion it was mentioned the possibility of organizing an exhibtion for me. Acording to the MUO schedule there were no free times in the following five years, and it was told that the Croatian Design Association Gallery (HDD Gallery) could it eventually realized. Mr. Marko Golub, the head of HDD Gallery, accepted enthusiastically that suggestion.

Since I retired in 2008 I have come to Croatia every year in April and return to Canada in October. As soon I came to Croatia in april 2017, Marko Golub and Koraljka Vlajo asked me for a long interview. It held on several occasions, and it was about everything; from my first idea to work as designer when I told to myself “I have to do this” at Italian design exhibition at MUO 1963, my study period at Academy of Applied Arts in Vienna, seven years period designing for Croatian – Yugoslav factories, leaving for Canada, 42 years of living and working in Canada: Montreal, Winnipeg, Toronto, Boston (USA) and activities as retired designer. I described every project in details, circumstances how it came to the projects, the thinking process, how I defined the design directions in the sense of market expectations, ergonomic characteristics, choice of materials, formal shape-aesthetics and choice of production technologies. This conversation has been very stimulating since I have been “forced” to remember great deel of details which have faded away with the time. Until September 2017, we exchanged many emails and I went many times for consultations to the HDD Gallery. I have known that Marko and Koraljka are exceptional writers about design topics. They have confirmed that with their accompanying text about each product presented at my exhibition. I have been especially impressed with Golub’s statement that this has been his best text ever and Koraljka said that this has been her best experience, the most painless cooperation.”

EVERYTHING WAS READY FOR THE OPENING OF EXHIBITION on September 13,2017 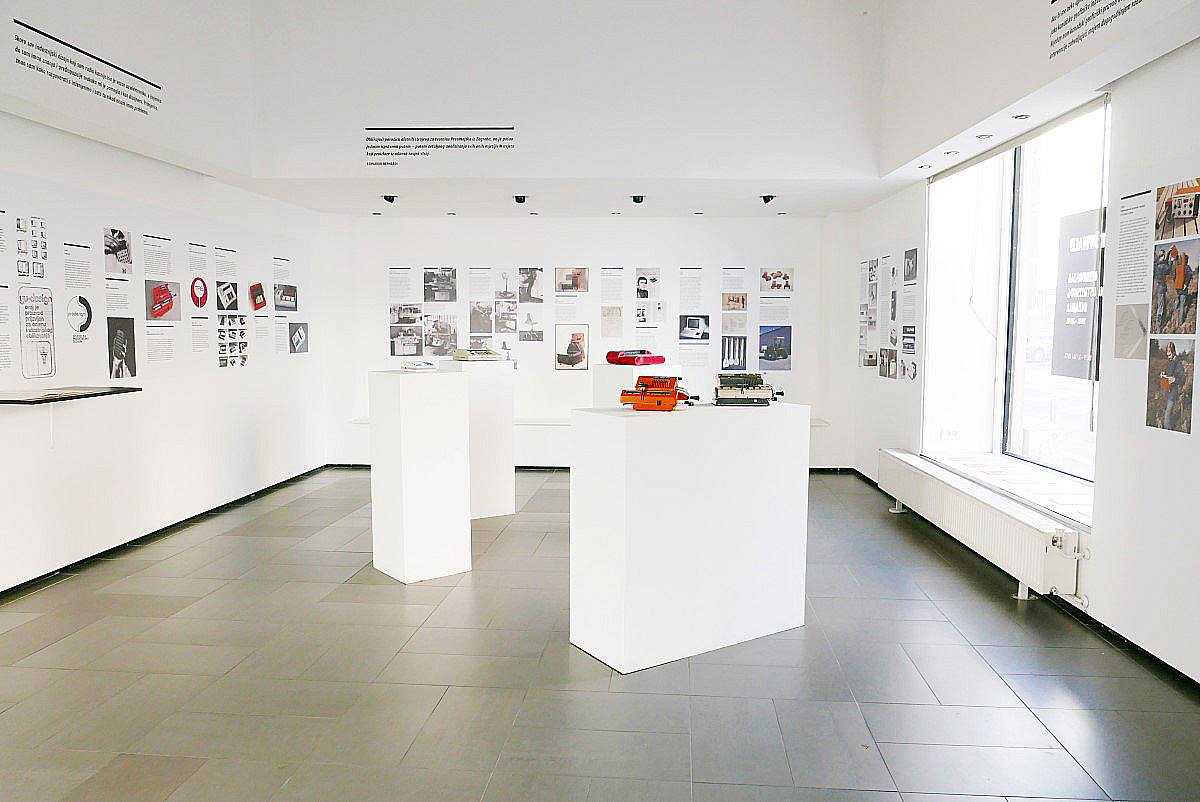 Jasna Lovrincevic: “This exhibition is a great acknowledgment for your work, made in Croatia and Canada. Could this exhibition compensate, some of unpleasant moments you experinced in Yugoslav and Canadian periods?”
Davor Grunwald: “Yes, new contacts, beautiful exhibition and great response from public and media are the medicine that heals all wounds, great compensation for all my troubles which I went through. In the middle of seventies last centuries I had blocked the way of someone “above” in former Communist party (in former Yugoslavia), so they canceled all my contracts with my clients-factories. Canadian bad experience did not have political intonation; they were generated by hierarchy of power.”

Jasna Lovrincevic: “Your exhibition has generated positive responses from the Croatian media, how do you feel now?”
Davor Grunwald: “Fantastic! And for media attention you have to have some experience. I was a little bit afraid of that. It turned out just fine, so I told myself: I can do that! I feel totally fulfilled of my life mission. The fear of the question, what next? –disappeared entirely.”

Jasna Lovrincevic: “What do you like most about the exhibition: the exhibition organizers, organization, media response or public interest?”
Davor Grunwald: “If I would evaluate all you listed with numbers from 1 to 10, all of that would recive the number 10! I have already described organizers and organization. I have been surprised how the journalists came prepared with questions on the topics of industrial design which does not come up in news every day. That will remain in my memory as a very nice experience. There were many visitors at the opening celebration. Many asked me if I could recognize them. Fifty years has past and they have changed! Many admitted they did not know what I was doing all these years including some members of my family.”

Jasna Lovrincevic: “Your biography shows your great courage and at first your self confidence. Besides your excellent education and your positive professional experience, obviously there is something more. Talent? Intuition? If you could please tell us more about that?”
Davor Grunwald: I will focus on: “obviously there is something more”, Talent? Intuition? I have developed technique of how to get familiar with the object I have to design. I try to collect all relevant informations. All of them I “deposit” in my mind and let some time to “mature”. I have strong perception; I “see” the pictures of my future designs concepts. Often I get up in the middle of night and sketch down what I “see”. In my case this could be called talent. Intuition always helps me for making important life decisions. For some of them, it takes a long period of time to prove that they have been right decisions.”

Jasna Lovrincevic: “Have you designed something new since our last conversation in March 2016?”
Davor Grunwald: “For the last ten years since I got retired, I have worked under the motto: If I need something, someone would need that too! I have created rack for Porsche Boxster, wine/oil barrel and safety bicycle stick. At the moment I am working on “garage” for bicycles and scoters. People usually use plastic covers which stronger wind can easily destroy. I have made metal construction and have covered it with strong plastic material, made to withstand strong winds.”

Jasna Lovrincevic: “How long have you been the member of Croatian Design Association (HDD), and what is in general your contribution to the Association?”
Davor Grunwald:” I am the member of HDD since its founding 30 years ago. Every year when I come to Zagreb I visit their office, but we have never developed any project together. When my professional opus has been archived by Museum for Art and Craft (MUO), there were the interest from both sides to work together. From that point it started the beautiful exhibition under the title “Davor Grunwald – Retrorama Of Industrial Design 1968 – 2008. I did the guiding tour through the exhibition, explaining all projects and answering the visitors questions. This kind of presentation allowed me to be more relaxed and spontaneous.
The promotion of my monograph in October 11, 2017 was not planned for that time and Marko Golub and Koraljka Vlajo, “Dream Team” of HDD surprised me with it and made me very happy.”

Jasna Lovrincevic: “In documentary movie, your first and famous design, under the name Sculptra, has been presented. The scenes with Sculptra, all in white, look very elegant. Who has been responsible for that visual aspects?”
Davor Grunwald: “I brought two items of Sculptra to be hanged on the wall. The cameraman came to make the movie. Spontaneously I put the Sculptra on pedestals, I turn them in such way that surface showed the most of contrast between the illuminated and in shade portions. I suggested that I should be surrounded by Sculptras because in my written materials I am claiming that Sculptra is my three-dimensional emblem. So it could be said that I am the author of this scene.” 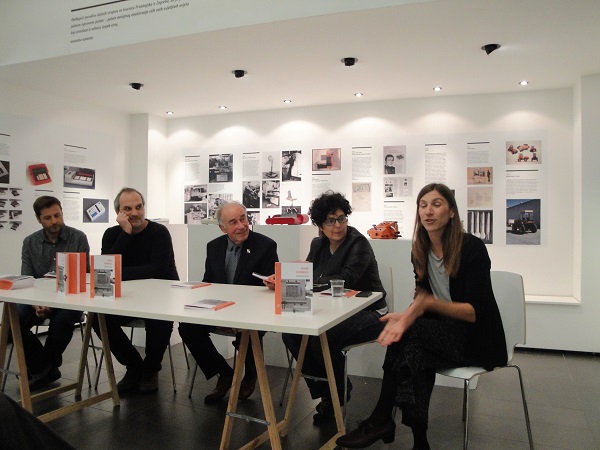 Jasna Lovrincevic: “You are living on two continents! This is also very interesting. Could you tell us something about that?”
Davor Grunwald: “We come almost every summer, for short periods to Croatia. Since we got retired in 2008 we stay for six months every year, from April to October. We are traveling through Croatia visiting the places we have never seen before. Winters we spend with our children and grandchildren in Toronto.
Next year 2018 the “Zagreb” exhibition will be moved to Split, expanded with my designs I created after I got retired 2008.”

At the opening of the exhibition Davor Grunwald Retrorama of Industrial Design, 1968 – 2008, Davor Grunwald addressed the guests with welcome speech which we are presenting here by his permission.

Ms Masa Milovac, President of Croatian Design Association, Your Excellency the Ambassador
of Canada, Mr. Daniel Maksymiuk and His Assistants, Dear colleagues, friends and members of my family:

It is a great pleasure to welcome all of you to this exhibition.

The highlight of my personal and professional life is happening here right now! Thank you all for coming to share this overwhelming feeling of accomplishment. In my memoirs which will be soon published in my monograph, I have written that it was not a straight success. Failures, disappointments were often part of my professinal way. The bottom line is what counts and this Exhibition has proved that it is worth to be stubborn and follow the guiding light.

Thank you Canada for accepting me and giving me a chance to nurture my talents I was born with!
Thank you Croatian Ministry of Culture and City of Zagreb for your sponsorship.
Thank you HDD’s “Dream Team”: Koraljka Vlajo, Marko Golub, Barbara Blasin, Miran Krcadinac, Ksenija Zakula and Monika Dzakic for your extraordinary efforts to set up this Exhibition.