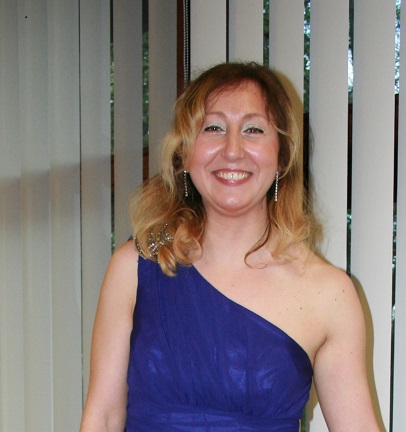 Enigmatica Opus E is the latest album by internationaly recognised pianist Diana Brekalo with the music from German composer Hubertus Schwinge. The album is recorded in Potton Hall Recording Studio in England. A musical exploration of truth, perception and delusion through eight contrasting movements, Enigmatica presents the theatre in two acts with four scenes. Celebrating the launch of the CD in Stuttgart, on April, 13. 2018, Hubertus Schwinge explained that the sources for his music were the piano improvisations based on classical musik he created during his twenty years accompaniment of the dancers (at the piano) at the “Studio for Rhythm” in Hannover.

This is the second Brekalo’s album with musik by Hubertus Schwinge. The first one was “24 Nocturnes Opus N”, published 2015.

With Diana Brekalo, known for her brilliant technique and musicianship, especially the ability to elevate the performed work to a high artistic level, I spoke after release of her new album. 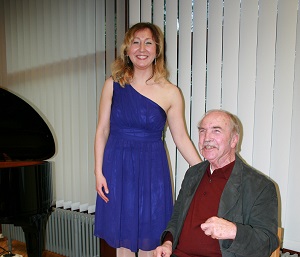 Jasna Lovrincevic: “How did it happen that you recording the music by Hubertus Schwinge again?Did you already perform the Enigmatica?”
Diana Brekalo: “Hubertus Schwinge was very enthusiastic about my recording and the performances of the “24 Nocturnes”. And because that CD had sold quite well, he asked me after the celebration of his 70th birthday, if I could imagine to record his big Enigmatica. Of course, I was very touched with that opportunity and I agreed.”

Jasna Lovrincevic: “The Enigmatica lasts quite long, for 71.26 minutes. How long did you prepare for its recording?”

Diana Brekalo: “My impressions of Enigmatica are that it is a very long, profound work, very rich in contrast in its character and style. For example the contrast between the first movement and the Minnelied (the third movement) is very big. Furthermore, it was also a challenge for me to learn the whole work of 72 minutes and to take over this responsibility for its first recording. I am a person who likes to take on challenges and do my best to make the music accessible to each listener.”

Jasna Lovrincevic: “What were the recording conditions of the recording studio?
Diana Brekalo: The circumstances for the CD recording were great. Hubertus Schwinge said I could choose a studio in England that I like and that is financially viable for him. We had several options but none was 100% perfect. Since I recorded the Sonata for Pianoforte by Christopher Gunning at Potton Hall back in 2014, in Potton Hall I knew what a great grand piano I would have. So I suggested this studio because it was also very secluded from the city. We could record at any time. The accommodation was right next door, our hosts made food for us when we wanted, the piano tuner adapted to my needs, and I also had a swimming pool, sauna and steam room. So it was everything that makes me happy and there were the best conditions for a successful CD recording. With the sound engineer Luca Gardani I had already worked together several times and we have, as always, understood each other very well.” 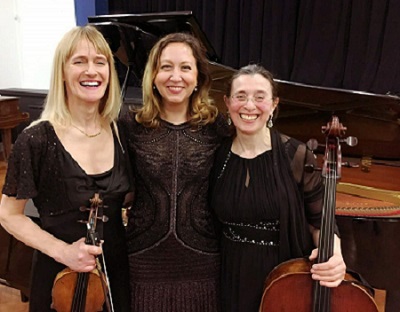 Jasna Lovrincevic:”For the last period of time you have often performed with Trio Solarek. When did you beginn to play with it? What kind of repertoir do you have? How do you coordinate your rehearsals, because the Trio’s members lieve in different countries?”
Diana Brekalo: “I have been playing with Trio Solarek since 2011. I played piano concertos twice, 2008 and 2010, with violinist Marina Solarek, who was the Concert master in the orchestra. At that time, Germany played at the World Football Championship against Brazil and I was allowed to leave the rehearsal earlier. I sent Marina Solarek the scores via sms while she kept rehearsing with the Orchestra. Since she also comes from Germany and we both were looking forward to Germany, we got along very well right from the start.

Then she called me in summer 2011 and said, her pianist got sick and if I would play a concert in Bremerhaven with her trio. Of course I had to check my appointments and confirmed it. We played Brahms Trio Opus 8, Trio in D major by Joseph Haydn and a little bit more. I got along really well with the cellist Miriam Lowbury and we have been playing concerts together since then. The repertoire is very extensive. Our last concert consisted only of female composers, then from time to time we perform something contemporary, Brahms, Shostakovich and the classics of course. Our rehearsals always take place when I am anyway in the UK, have concerts in London or they visit me in Stuttgart. Then I play my recitals and we rehearse in between. As Marina still plays the violin in the Royal Opera House and Miriam in the BBC Concert Orchestra, we always have to coordinate the dates together. But so far it has worked very well and I enjoy playing music together with them. Learning and shaping together, other repertoire is a lot of fun. Marina, for example, flew to the Schott Publishing House in Mainz to copy the notes of a “forgotten” composer named Johanna Senfter. She will now rewrite the manuscripts on a computer program so that we can prepare another of the five trios for concerts in 2019. Johanna was a student by Max Reger and wrote a total of 9 symphonies and has an interesting compositional style. We are very curious to see how this discovery will continue and we look forward to further joint projects.”

Jasna Lovrincevic: “Last year you made your music theatre debut. What kind of challenge was it for you?”
Diana Brekalo: “The concert theater under the direction of An-Ting Chang 2017 was a very exciting project. We performed Anne Bronte’s The Tenant of Wildfell Hall together with two actors and myself on stage. In several performances I have performed Skriabin 24 Preludes, Mozart Violin Sonata in B flat major, Brahms Rhapsody op. 79 and the Edward Ballad. We rehearsed around the twelve weeks in the first four months of 2017, made the backdrop together, edited the lyrics together, discussed costumes and what role I schould play in the piece. The actors acted from time to time in the rhythm of the music, sometimes the music amplified the dramaturgy. Sometimes I played Annabella and with eyes and facial expressions showed different reactions, so I improvised very extensive. I had a lot to do. Ninety minutes almost constant playing without break was very exhausting. We had a great response and a lot of fun, but also we had a bit of drama during the intense rehearsals. It was also interesting for me to see how different actors work and understand music.” 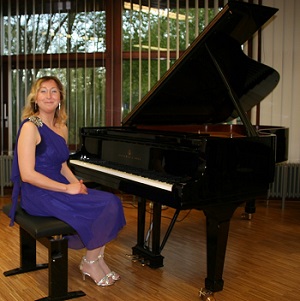 Jasna Lovrincevc: “What is your next project?”
Diana Brekalo: “In July 2018, I will have the pleasure to play at the Syssma Chamber Music Festival in Finland. Together with Elisar Riddelin we will perform a piano quartet called “Chasse Neige” written by young Sauli Zinovjev and Franck ‘s Violin Sonata. Violin: Elisar Riddelin, Viola: Vuokko Lahtinen, cello: Sirja Nironen are the musicians I am going to collaborate together. In the second concert half we will play Brahms Piano Quartet in C minor. It will be a lot of fun, as the violinist was my piano student.”