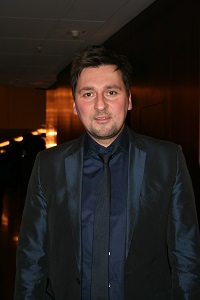 Ivan Vrgoč and his santinis-Production will be the first in the world to apply 3D holographic projection technology to a theatre play, in the show Der Entertainer, within the Abriss Festival, at Theatre am Kurfürstendamm in Berlin. The premiere of Der Entertainer will be on March 9, 2018. It will be shown the hologramm of two famous actors from Berlin, Harald Juhnke ( died 2005) and Anke Engelke. Abrissfestival, produced by santinis Produkction, held from January to May 6, 2018, is inspired by the closure and demolition of Theatre am Kurfürstendamm, which will be replaced by casino.

The Festival, which included four performances and three events from the series of Santinis & Friends, is the last spectacle at the Theatre am Kurfürstendamm of hundred years long tradition. The Trio Konstantin Wecker, Bodom Wartke and Benefiz – Jeder rettet einen Afrikaner (Charity – Everyone Saves One African) are in the programme of Santinis & Friends.

I spoke with Ivan Vrgoč after the premiere of Das Wunder vom Ku’Damm (The Miracle of Ku’Damm), held on February 10, 2018, in which has been evoked the events related to the Theater am Kurfürstendamm after the decision had been made about its closure and demolition.

In the play Das Wunder vom Ku’Damm, based on the motives of the a 1987 science fiction movie Batteries Not Included (in Germany known as “Das Wunder in der 8. Straße” ), the theatre under threat from property investors received the help from the universe, from an unidentified flying object (UFO), which brought the whole Theatre to the universe.

In one of the leading roles in Das Wunder vom Ku’Damm, appeared Barbara Schöne, who brings to the play the spirit of the old, splended times of Theatre am Kurfürstendamm where she has used to play before she retired from the scene ten years ago. It is her first appearing on the stage after that time.

Alongside to the actors Patrick von Blume, Luise Schnittert, Holger Franke, and Gian-Philip Andreas, who play, sing and dance, the Berlin’s musician Nikko Weidemann is permanent on the scene with his nostalgic songs and also as accompanist playing guitar or keyboard. Although physically not in the theatre, the voice of Josef Hader, Austrian cabaretist and actor, resonated across the theatre, at the moment when the whole theatre schould be absorbed by an unidentified flying object.

The whole show is a combination of musical, comedy, fantasy, true facts, nostalgia, hopes, irony and indifferent realities, but laugther and spontaneous applause in the audience (at the premiere) and applause in the rhythm of music, give impression about a theatre which is beyond the postmodern with its determinants. It is more about one which oscillates in indeterminacy of metamodernism.

Jasna Lovrinčević: Das Wunder vom Ku’Damm (The Miracle of Ku’Damm) is announced as the first ‘santinis’ production of a self-written text. If you could please tell more about the text, whose idea was to write that kind of text?

Ivan Vrgoč: The text was written by our dramatist Patrick Wildermann. He has been with us for five years. The text depicts the situation related to the demolition of the Theatre am Kurfürstendamm, the stories were told how they happened. That was our idea.

Going from the fact that the audience at the first public performance of Das Wunder vom Ku’Damm obviously had great fun and it was very satisfied with the performance, but theatre criticism has expressed a different opinion of the play, I asked:
Jasna Lovrinčević: Have you been personally satisfied with the text?
Ivan Vrgoč: I have been satisfied how the text has been made, but with the direction, I was only half satisfied.

Knowing that direction was not strange to Ivan Vrgoč because he already has worked as director, I wondered why he did not intervene.
Ivan Vrgoč: We could not intervene much because we focused on the second production “Der Entertainer” with popular German actor Peter Lohmeyer, which will be held on 9 March. For the first time we are working with a new technique, holography, which has never been used in the theatre. The musicians used it. With holography we will create actors who are on stage but also it will come to the stage Harald Juhnke who is already dead.

Jasna Lovrinčević: Did you need to have a special permmission for hologramm projection?
Ivan Vrgoč: We co-operate with the Musion Holotec company that runs it at a the global level. They have already made Michael Jackson’s hologram, Mariah Carey and so on. We came into contact with them and we met with them. I’ve got that idea for two or three years, but we can not finance it by ourself. When we got in touch with the Musion Holotec company, it was interesting also for them to try to apply holographic technique to a theatre. We’ve been working with them so we’ve managed to do it now. 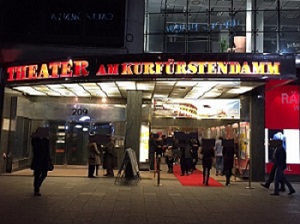 The latest production of the Abriss Festival will be Shitfaced Shakespeare. It is very successful play in the United Kingdom, and it has been running since 2010. The company santinis-Production has received a license for the first adaptation of that concept to Germany.

Ivan Vrgoč: Shitfaced Shakespeare is scheduled for April or May, performances will take place until midnight, and later will be a party at the theater. It is a very successful play in England, and now it will be performed for the first time in Germany.

For the end of the Abriss Festival it has been prepared a big surprise .

Ivan Vrgoč: On the 5th and 6th of May, we will be presenting all the Abriss Festival performances from 14:00 to 20:00, until midnight, then it will start a big Abrissparty.